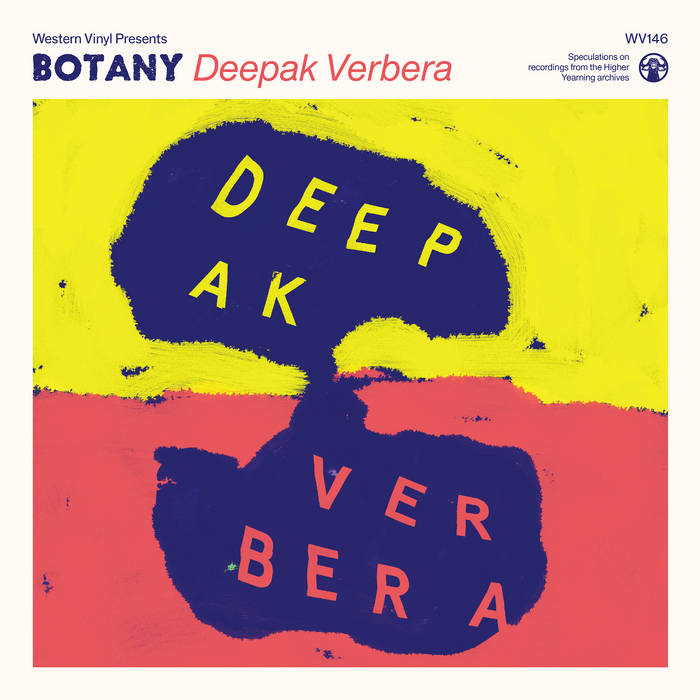 Deepak Verbera, the third LP by Austin’s Spencer Stephenson aka BOTANY, bends the beat-driven path carved by the composer’s first two records into meterless cosmic territory, juxtaposing free jazz arrhythmia with cathedral-filling harmony, ringing off the temple walls with soaring grandeur. The billowing textures that loomed behind his previous output break unabashedly into the foreground, shedding the beats that once stenciled them in. What arises in the absence of discernible rhythm is a psych-inflected scrapbook of atmospheres with tremendous sonic and emotional breadth.

Deepak is a Hindi word meaning “lamp” or “source of light”, and Verbera is a Latin word meaning “lash” or “scourge”. This pairing of words articulates the exact dynamic at play here, as brightness intensifies only to dim into darkness, the album vacillates from heavenly luminosity to earthly severity, soothing and searing in patient turns.

In essence Deepak Verbera is a soundscape record created through methods usually found in hip-hop; vinyl samples, looped vocal phrases, pulsing bass, and warm synths all shimmer with kosmische-indebted splendor, like Popol Vuh with MPCs and a stack of secondhand records. “Whose Ghost” opens the album in absolute upheaval, challenging the listener to endure an Albert Ayler-style clamor of argumentative drums and brass. Those who weather the storm are soon consoled by the library-music-inspired “Has Appeared” which cleanses the palate for the ascendant, “Ory (Joyous Toil)”. Its incense laden sister song “Burning From the Edges Inward” plays like a mini-album unto itself, seamlessly shifting moods with each passage as rolling waves of acoustic piano diffuse into smoked-out guitar drones and witch-like choirs. Side A ends with “Outer Verberum,” a guitar-heavy track which can only be described as “free-psych”. Tracks like “Gleaning Gleaming” are built out of micro-snippets of soul records that cascade over themselves to become something wholly incomparable to their source.

The album’s back cover explains that this music is an attempt to recreate the lost audio recordings of a little-known mystic traveler, Horris E. Campos. During the 1970's and 80's, Campos claimed to have contacted entities made of light that transmitted information to him through vibratory tones, which he then emulated on tape using various overdubbed musical instruments. Whatever the details of Campos’ story, Deepak transcends this esoteric source to become an allegory of Stephenson's own ability to speak to the ether and bring the message back to us.

Growing up outside Fort Worth, Texas (the birthplace of Ornette Coleman), Stephenson spun Botany out of a youth full of music handed down from a drum-n-bass-producing older brother and a guitarist father-- borrowing effects pedals and drum machines from both, before his first experiments with recording software at age fifteen. A drummer foremost, Stephenson went on to study Jazz drumming, piano, and guitar in college before dropping out, primarily focusing on sample-based music all the while. He concedes, “I spent most of my time there opening the top of the piano to pluck the strings with my fingers, or scraping vibraphone bells with a cello bow, really anything I could find to create interesting sounds that were kind of atypical to me at the time.”

After a brief stint playing drums for an experimental act in Denton, Texas he released his debut EP on Western Vinyl in 2011. Stephenson spent the next three years constructing his tour de force full-length debut Lava Diviner (Truestory), which was followed by the digital single “Laughtrack,” a collaboration with Father John Misty. Struggling to find foothold in the Dallas/Fort Worth/Denton area, he moved to a city with a long legacy of heady music, Austin, home of the 13th Floor Elevators and ambient kings Stars of the Lid, both of which spiritually precede Stephenson’s music. Quickly becoming a vital member of Austin’s bubbling electronic scene, in 2015 he released his hallucinatory love letter to hip hop, Dimming Awe, the Light is Raw , an album that Pitchfork called "...alternatingly danceable and meditative psychedelia," and Gorilla vs. Bear called a "glorious synthesis of dusty hip-hop vibes and cosmic free jazz spirit." Reading these descriptions, it’s no surprise that his latest full-length Deepak Vebera is even more unhinged from any single format than any of his previous albums. Moving beyond the limited expectations of any single genre, Deepak Verbera presents a closed-eye cinema quilted together from sounds both found and created, with a masterfully blurred sense of which-is-which. We can only assume its creator delights in keeping you guessing.

Bandcamp Daily  your guide to the world of Bandcamp